Pre-Brentz Family Tree and History back to 1375

During our trip to Duehren in 2012, we met some members of the Wolfhardt family who are our distant relatives.  They shared a bunch of documents with me on the family tree and history.  Here is the family tree that documents ancestors all the way back to 1375. To put the year 1375 in perspective - this was the last part of Middle Ages and the eve of the Renaissance. Black Death just wiped out 1/3 of Europe’s population 25 years earlier. Edward III is King of England in 1375 and Gregory XI is the 201st Pope. The Ming Dynasty has just begun in China, Aztecs are thriving in Mexico, and the 1100 year old Byzantine Empire is just about to fall. The Incas will build Machu Pichu 75 years later. Columbus will be born 75 years later, Michelangelo and Martin Luther about 100 years later, and Shakespeare about 200 years later. The printing press will be invented 64 years later. The American Revolution will begin 400 years later.

Here is that family tree.

In addition, they shared a Wolfhardt family document that had a lot of information on some of these people.  Here were the highlights:

Here is another visual of this family line with some of the history and context. 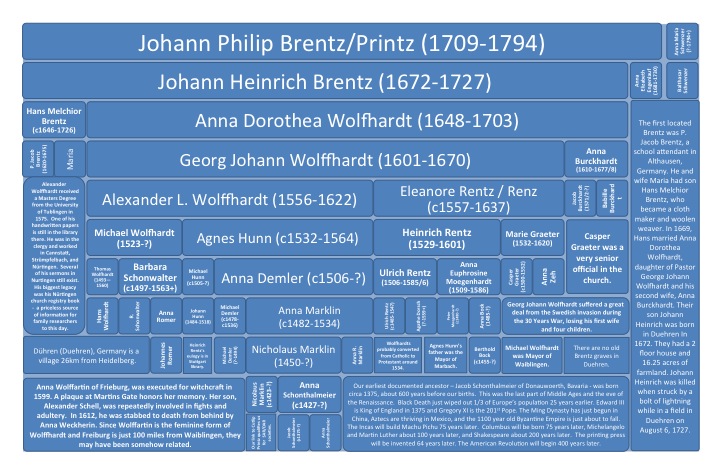 Hope that was helpful.  If so, feel free to drop a note on our Guestbook.